Women-led mobile gaming startup Robin Games raised funding around the idea of ​​carving out a new niche in the market of “lifestyle gaming.” The idea, the company explained at the time of its 2020 public debut, was to create a fantasy gaming experience that’s more sophisticated and stylish — something more in line with the sort of content you’d typically find in a lifestyle magazine or Instagram influencer’s profile . Today, the startup is releasing its first title to tackle this concept with the launch of a mobile game, PLAYHOUSE, which combines both gameplay and shopping in one experience.

Available on iOS and Android, PLAYHOUSE is a DIY design game that allows players to drag-and-drop furniture and décor into spaces to create original looks for rooms using elements like wall art, sofas, chairs, tables, plants and more. This alone doesn’t make the app unique — the interior design genre is a popular subgenre within the Simulation Games category on today’s app stores where competitors like Playtika’s Redecor, SayGames’ Decor Life — Home Design Game, and Crowdstar’s Design Home: Dream Makeover can be found in the Top Charts.

Instead, where PLAYHOUSE differentiates itself from others is in both its technology and its partnerships.

The company allows users to drag-and-drop pieces into the space but also move, rotate, resize and even layer items as they style the space in a much more freeform manner than some other games allow. In addition, the company is working with real-life furniture brands to make the items in its game shoppable in real life.

At launch, PLAYHOUSE features shoppable experiences that connect players to brands like Arhaus, Article, 1stDibs, Chairish, One Kings Lane, ABC Carpet & Home, Jenni Kayne, Society6, Bloomscape, Room & Board and Lulu & Georgia, among others. In other words, the game’s goal isn’t just to provide a creative outlet for art and interior design fans but to also drive the discovery of new furniture and decor. 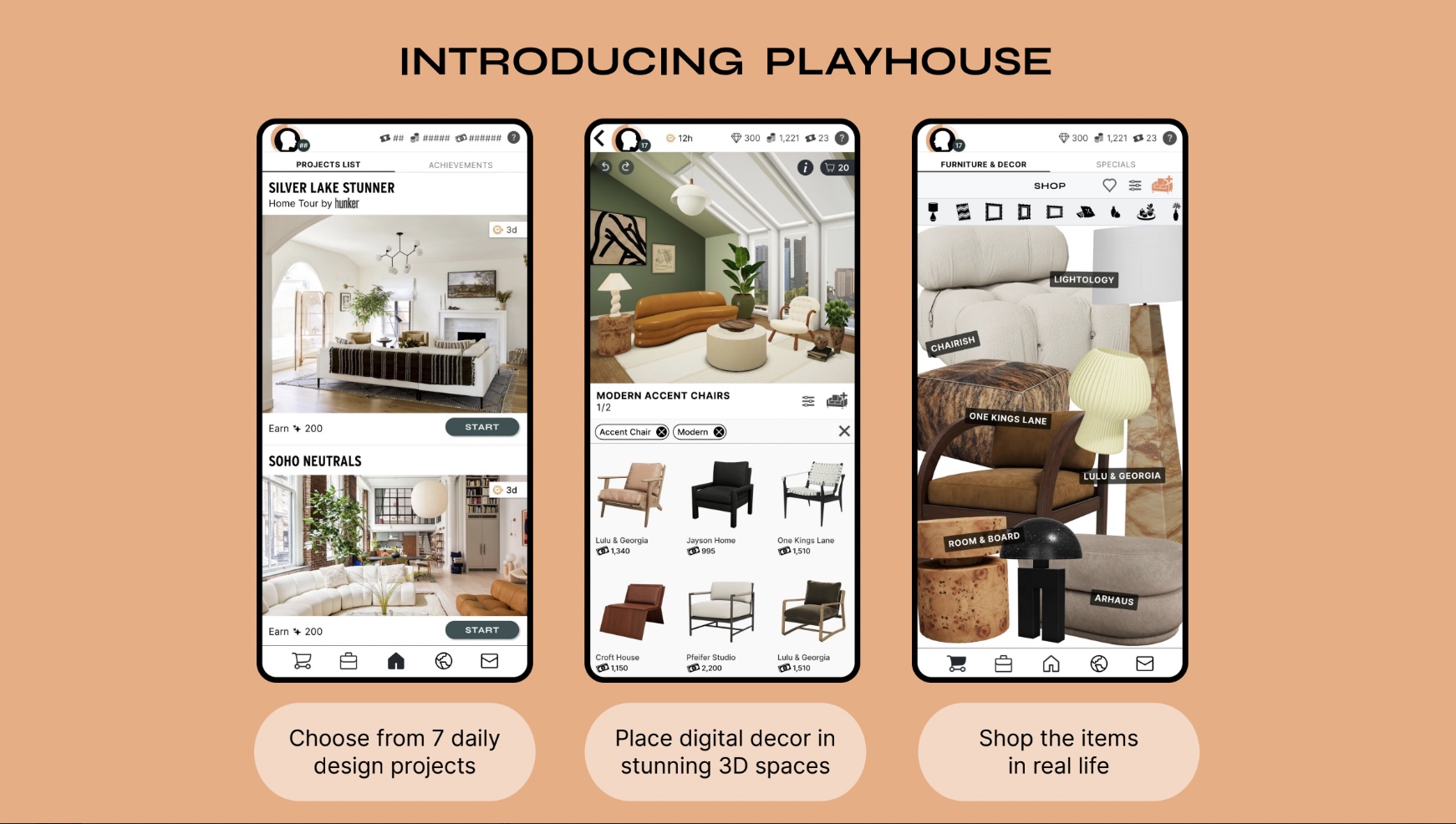 Robin Games says that, at launch, there are over 6,000 pieces of real furniture and décor available from more than 100 home-design brands available inside the app. Players can choose to purchase the actual items they’re using to create their designs by visiting the retailer’s website.

This concept is somewhat like Pinterest’s new collage-making app Shuffles, which allows its players to create custom art experiences using their own photos and Pinterest Pins. While the Shuffles app is primarily being used as a creative tool before publishing to TikTok or Instagram, the items featured in the collages link to their Pin’s page on Pinterest — where they’re also connected with the retailer’s website and can be purchased, similar to PLAYHOUSE.

“One of the main reasons we wanted to make PLAYHOUSE, and ‘Lifestyle Games’ in general, is because we see a hole in the market for truly expressive, creative games,” Robin Games founder and CEO Jill Wilson told TechCrunch. “It’s unusual to think of an interior design-focused game as a fantasy game but we do — it’s a different type of fantasy from what is typically explored in games. Getting to design spaces with beautiful pieces as if you are an interior designer is a real-world fantasy for many people, and our company is dedicated to giving players that experience,” she added.

In addition, PLAYHOUSE users can submit their design projects to be rated by other players, which allows them to earn tickets, coins and gems as well as other décor pieces that help them to level up. The company also partnered with content creators including design enthusiasts, artists, Airbnb hosts and others to create limited-time “hosted projects” at inspiring players’ own designs.

During its soft launch period, the team refined the game mechanics, play controls, onboarding experience and the in-game economy, which is free-to-play with in-app purchases. While you can move forward without playing, players can choose to pay to unlock additional pieces with gems they purchase instead of waiting to earn them in the game through achievements. Limited-timed bundles around a particular theme are also sometimes available for purchase — like a bundle of special plants and plant-themed items that are only available in the bundle.

So far, over 1 million design challenges were submitted with the most dedicated players participating in every project released daily and sticking around long term, Wilson says.

Following its $7 million seed, Robin Games closed on a $14 million Series A in 2020 and continued to develop PLAYHOUSE in the months that followed. While being a women-led startup has given them an advantage in a game that’s marketed primarily to women, Wilson believes it’s the team’s diversity that will help it to get ahead.

“I like to make games that I’d want to play myself and believe that surrounding myself with a diverse group of talented people who also want to play the game we’re making gives us the best chance of success,” Wilson explains. “At Robin Games, we have over 50% women on our board, management team and team overall — and the majority of all our team members are passionate about design. Putting creative decision-making in the hands of potential players is the key to our authenticity and why we believe true design lovers will love what we’ve made. While we anticipate our audience will be primarily women, we have tried to make it as inclusive as possible and hope that everyone who loves design will enjoy it,” she says.

PLAYHOUSE is live today on both iOS and Android as a free download.

Updated, 8/30/22, 8:20 pm ET: While startup press materials originally referenced Condé Nast and Design Milk as publishing partners, the company informed us the final publishing partner list did not include these brands.