New York City is defined by its architecture, and in turn, diverse ways of living. As the nation’s “metropolis,” it has also faced some of the most challenging housing problems of any American city. From single-family homes to high-rise residential towers, housing has evolved at different paces and scales throughout the boroughs. In turn, each district and county is home to a wide range of residential styles and housing solutions. 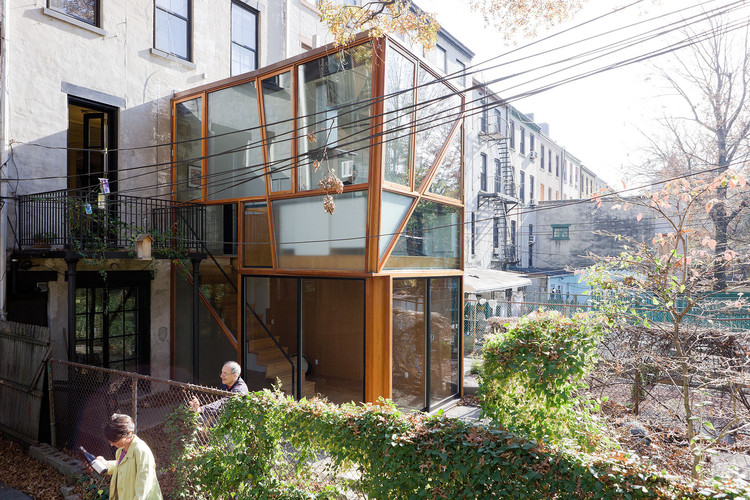 All five boroughs came into existence with the creation of modern New York City in 1898 when they were consolidated within one municipal government under a new city charter. Named after the Dutch village of Breukelen, Brooklyn is located on the western end of Long Island in Kings County. It is New York City’s most populous borough, holding roughly 30 percent of the total NYC population. From the first center of urbanization sprang up in the Town of Brooklyn, to the modern urban fabric, new housing projects are being designed to reimagine life across the borough. The following designs showcase this changing landscape and give a glimpse into the lives of Brooklynites today.

As the design team stated, the evolution of living in cities increasing embraces nature, almost negating the urban character of neighborhoods. The design for a renovation and additions to a townhouse in Brooklyn is generated from the idea of ​​fusing the interior space with the outdoor landscape through the creation of ground-up pavilions with specific experiential qualities. Two main pavilions have been juxtaposed to the existing building— in a way to have an unobstructed view of the garden through the windows and also blurred views — obtained from the partial over imposing of a wooden screen to the addition facades.

Carroll House is a single-family residence located in a typical 25×100-feet Brooklyn corner lot. 21 shipping containers are stacked and cut diagonally along top and bottom, generating a monolithic and private volume within the urban fabric. The diagonal cut modifies the conventional ground-floor rear yard type and uses, allocating outdoor space at each level. At the same time, the container walls along the diagonal cut shield the outdoor space from passers-by. Large sliding glass walls create continuity between indoor space and outdoor private enclosed decks.

Aperture 538 is a 10 unit multi-family residence located in the neighborhood of Clinton Hill, Brooklyn on Washington Avenue. Central to the exterior is a copper screen, finished to a Corten appearance, perforated with an abstracted image of the Brooklyn Bridge and modified for light and air requirements. The flat, warm brown face of the building is meant to continue the rhythm of brownstones present on Washington Avenue. Unlike the brownstones however, this face moves – shutters in front of windows and balconies can be opened to allow residents direct views out to the tree-lines street.

The DUMBO Townhouses are located at the corner of Pearl and Water Streets in the Borough of Brooklyn. The project involves the demolition of an existing one story, warehouse located in the DUMBO Historic Section of Brooklyn and the new construction of 5 single family townhouses. The total project includes approximately 18,000 gross sf. Across from a newly designated public park, the building envelope is made up of a series of high performance Ductal concrete panels that provide shading and privacy for the residents.

Originally built in 1889, this three story townhouse was renovated to become a certified Passive House with the aim of retaining as much of the original character of the building as possible, while significantly reducing its operational energy use. The envelope was substantially insulated on the interior of the building and new triple-pane windows were installed. Multiple keep interventions the building cool with minimal mechanical demands, even during the ever-hotter summers of New York City.

Situated at the corner of 4th Avenue and 1st Street in the coveted Park Slope neighborhood of Brooklyn, 251 1st by ODA New York is the firm’s manifestation of its commitment to improving quality of life in urban areas. In this case, ODA’s inflected the building’s upper massing with a cascade of setbacks and terraces, yielding substantial outdoor space, as well as multiple exposures for units. In addition to the light and outdoor area, playing with the mass in this way also provides a contextual nod.

The owners of this 11-foot-wide row house in Brooklyn were faced with a conundrum that many young families in New York eventually confront: the possibility of sacrificing location for space. After living in the house for eight years, the pair – an architect and jewelry designer – chose to expand in order to make room for their two growing children and remain in the Brooklyn neighborhood they had come to admire. The original 2-story, 1000SF home was completely gutted and extended to 4 levels by adding a bedroom suite above and digging a new urban mudroom below.

Rather than an addition, O’Neill McVoy’s concept for this residential project was a thin, linear framed garden pavilion set in contrast to the heavy masonry brownstone. The 19th century brownstone remains exactly as it was, while the new pavilion, with kitchen and informal social space, sits alongside, up against the original backyard wall with no mediating connection. Entering the pavilion from the house’s parlor floor feels like stepping into the garden. The hybrid wood/steel framing members form a lattice-like structure open to the changing seasonal landscape of Brooklyn rear yards.